Ah, I can almost smell the sweet buds of Spring, so close are we to a new one of what we laughingly refer to here in Southern California as “seasons.” And as we approach that oh, so special time, movies—like people in love—will tend to get, well, downright silly.

Take, for instance, Race to Witch Mountain, which will roll out on March 13. Seriously, take it. Take this movie out back and shoot it. You may remember the original kid flick, Escape to Witch Mountain (1975) and this is nothing like it. Director Andy Fickman did not describe the film as a remake but instead as "a new chapter within the world of Witch Mountain.” Erk. The new chapter includes a monster called Siphon that was created by the folks who brought us the scary Alien and creepy Predator. Siphoned off all the fun, that’s what this monster did. Despite an engaging performance from AnnaSophia Robb (Bridge to Terabithia), Race is just another vehicle for Dwayne Johnson, who definitely did not Rock our world in this outing.

Then, on March 20, along comes I Love You, Man, a product of the twisted mind of John Hamburg (Along Came Polly, Zoolander). It is the story of Peter Klaven (Paul Rudd), a real estate agent who finally gets engaged to a hottie (Rashida Jones) only to learn that he doesn’t have enough male friends to even have a decent best man. Thus begins a series of oddball male dates, culminating in what we’d have to call an awkward situation, and one best left to the potential audience to suffer through (we don’t like spoilers, even in the silliest of comedies). Light hearted stuff, which one might intuit since the title comes from a Budweiser ad. You gotta love pop culture, man.

Always a sucker for animation, we were all over Monsters vs. Aliens, which has many of our favorite genres all wrapped up into one gumdrop of a film. And it’s in 3-D! When a SoCal babe named Susan Murphy mysteriously grows to 49’ 11”, she is labeled a monster, captured and stashed away in a secret fortress along with a whole group of gross, slimy and just plain weird monsters collected by the military over the years. But when aliens attack, the status of these misunderstood creatures changes. Ooze gonna save us? On March 27, it’ll be the monsters, of course!
Posted by Raechel at 1:46 PM 1 comment: 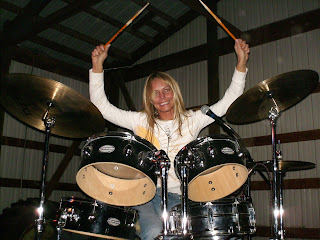 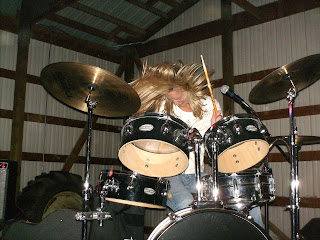 Wait, is this Axl Rose? No, it's Jennifer, the crazy chick drummer from the barn dance. Blondes apparently DO have more fun. Than almost anyone.
Posted by Raechel at 9:48 AM 1 comment: 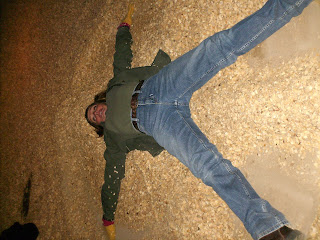 No, really. It's a sawdust angel named Joyce. You kinda had to be there. It was a barn dance at Dr. Garrett Lindemann's ranch and Gary Small and the Coyote Brothers provided the rockin' entertainment. I must say, Wyoming people really do know how to party. In a barn.
Posted by Raechel at 9:13 AM No comments:

Best in the West Traveling in Wyoming is such a treat for me, largely because I have been in the Cowboy State for less than a year. I'm now working with Wyoming Public Television on a documentary about the artists of Yellowstone and thus am wandering around looking for interviews and gorgeous scenery, both of which are very much in evidence.
I was heading for Jackson but decided to make a stop in Thermopolis to visit the Wyoming Dinosaur Center, the home not only of fantastic fossils, but also North America's only Supersaurus. Obviously this is a great place for kid of all ages, not just to view the reconstructed dinosaurs--including the ever popular T Rex--but to participate in actual archaeological digs as well. A good time was had by all, especially in the gift shop, where I nearly spent all of the money I had set aside for gas which, at today's prices, was quite a tidy bundle.
Night time brought us to the local Best Western motel, which has a forbidding brick exterior that resembles nothing so much as a reform school. However, once inside, we found that the new owner Andy had redone all the rooms in deliciously rustic pine furniture. We had a large room with terrific light, a firm but comfy king-sized bed, good pillows and a modern bathroom with built in hairdryer, coffeemaker and the usual amenities. Best of all, there is a spring fed mineral hot pool right in the center courtyard and the office furnishes fluffy towels. No need to even leave the premises to "take the waters."
Wireless internet was a little sketchy, but the desk clerk was more than willing to lend her computer, and then I discovered we could sit in the lobby and use wireless to our heart's content. Any inconvenience was easily made up for the by the bountiful (and free) breakfast spread. Fortified with a bagel and omelette morning meal and a steaming cup of Earl Grey to go, it was back on the road to Jackson.
It's a pretty long drive, made longer by the need to get out and shoot video every half hour or so, but we finally made it over the hill and I got my first glimpse of the towering Teton Mountains. Snow covered peaks reaching up into the clouds, these babies must have really impressed the first explorers wending their way toward Yellowstone, and their journey was much more perilous than mine, since they didn't have plowed highways. Basically, all I had to worry about was if I had enough trailmix and if I could reach the ice chest in the back seat to get another Diet Coke.

Ah, Jackson. As a California girl, I couldn't help but notice the resemblance to Knott's Berry Farm. And even though we couldn't really see the movie stars, since it was definitely the off season, but the smell of money in the air was palpable. I haven't seen so many colored contact lenses and designer bags since the last time I fled Hollywood. But all that aside, the lovely little Antler Inn was a breath of fresh air, especially as it had all the amenities of a big hotel but in little log cabin rooms and priced at well less than a hundred bucks. Plus, the wireless service rocked! There was no free breakfast, but there were pots of coffee, hot chocolate and three different kind of cookies in jars at the front desk. It certainly wasn't the first time I've made a meal out of Oreos and shortbread cookies.
Posted by Raechel at 7:43 AM No comments:

The Supreme Court is at it again. You know what I bleeping mean; trying to crack down on oscenities. It used to be that if a so-called obscenity was unleashed in the, shall we say, heat of the moment, the FCC would turn a blind eye, which some would say would be a redundancy, since the agency seems to have gone blind a long time ago. As we all know, the First Amendment of our Constitution allows us freedom of speech...unless the government says we can't have it. Now in can only be termed a butt kiss for the Bush administration, the Supreme Court again will be mulling over just how to punish raucous rockers who accidentally spew the occasional F-word, as the Supies so discreetly call it. First there was Bono, lead singer of the ultimate Irish rock group U2, who got so excited about receiving a Golden Globe for the Best Original Song that he said it was "really, really (expletive not deleted) brilliant." FCC regulators deemed his use of the F word as "fleeting" and decided to let it go, but the politically appointed FCC commission, which is different, thought otherwise. That was back in 2003, and they're still arguing about it. The year before, Her Glitziness, the one and only Cher received an achievement award from the Billboard Music Awards and used the F word to dismiss the many who had said, as far back as the high school she dropped out of, that she would never make it. That's one on them, eh? Good news is, both Cher and Bono can afford to pay the fines. So they can just tell the FCC to expletive off
Posted by Raechel at 8:16 AM 1 comment: